The Development Studies Programme- Birzeit University- had released a study entitled: The Gaza Strip after the Israeli withdrawal: an assessment of reality and a future vision. The study was carried out by a team of researches. It discusses elements of an  alternative Palestinian vision for the future of the Gaza Strip through a series of in-depth research papers using a critical-analytical approach.

The first chapter establishes a theoretical framework and a historical background of the Gaza Strip. In addition, it discusses the concept of the virtual state and examines the limitations of studying the Palestinian society from a sociological perspective.

The second chapter discusses dominant concepts regarding development in Palestine and the Gaza strip, and how theses concepts play a role in creating a development “myth”.

Chapter three offers a political-strategic analysis of the Palestinian political system. Furthermore, the chapter analyses the nature of changes occurring in the political scene especially those related to the unilateral Israeli withdrawal from the Gaza Strip.

The fourth chapter offers an in-depth presentation of the political parties’ experience regarding their visions of development, and the effect on the Palestinian development agenda.

The fifth chapter presents an analysis of the Palestinian civil society, based on the researcher’s experience in this field, with a focus on the last two decades.

The seventh chapter deals with the global-local dialectics, the chapter presents an in-depth look of the theoretical concepts on the reality of the Gaza Strip. It also provides recommendations for the future.

This Study is Only Available in Arabic 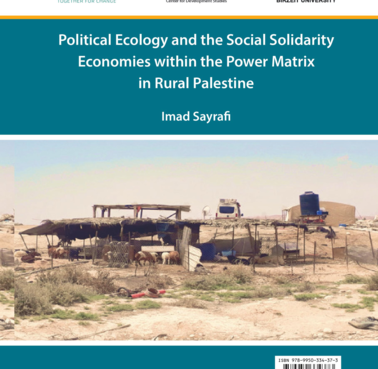 Author: Imad Sayrafi Executive Summary: The research explores the links between the access to resources and social solidarity economies in Palestine. It is linked to the project Land
Read More

Imad Sayrafi and Ikhlas Shtayya The boooklet focuses on the etiquette of communitcating with people with different disabilities, it is intended to be a very simple guide and offers an introduc
Read More

Gender and Human Development in Palestine