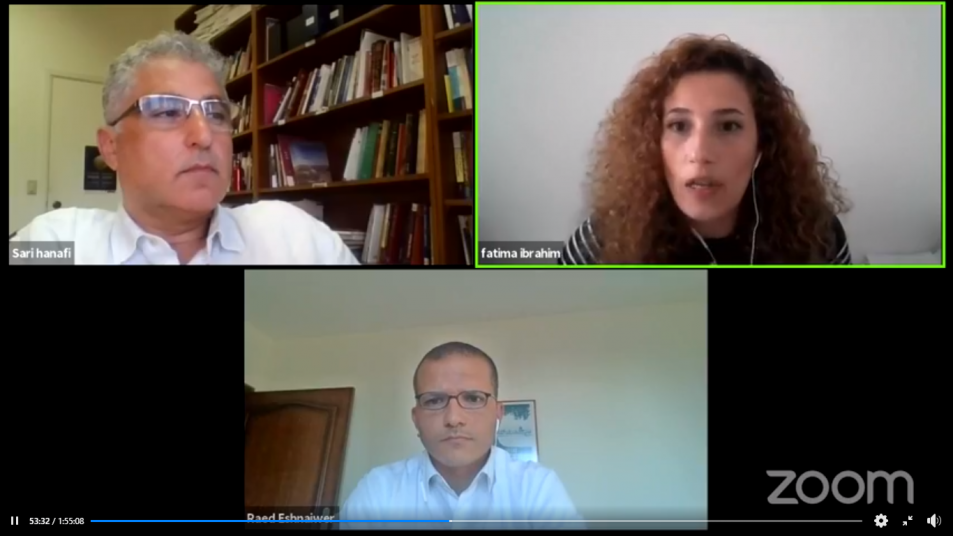 Birzeit University’s Center for Development Studies held a virtual symposium titled “Solidarity Inside Refugee Populations in Lebanon: Old Forms for New Crises,” featuring Sari Hanafi, a professor of sociology at the American University of Beirut, and Fatima Ibrahim, the director of the refugee program at the Refugees=Partners Initiative. Moderating the symposium was Raed Eshnaiwer, a researcher at the Center for Development Studies.

Hanafi explored the theoretical aspects of solidarity, elaborating on the ethical and political challenges that efforts to engage in affective, passionate solidarity and mediate distant suffering are facing. He pointed out that even though modern societies show compassion and empathy with each other’s problems, solidarity and burden-sharing among nations fade when it comes to refugees who live in the country and are frequently treated as risky outsiders, calling this phenomenon a moral contradiction.

Hanafi explained that current global consumption patterns have disrupted the balance between the individual, society and the environment. This was also visible during the COVID-19 pandemic, exacerbating the vulnerability and precarious conditions of the already marginalized refugee communities, Hanafi pointed out.

As a sociologist, Hanafi referred to the problem that social sciences tend to treat individuals as Homo Economicus, neglecting their human nature and responsibility as moral and compassionate persons. He stressed the importance of connecting social sciences with the philosophy of ethics and of analyzing people as persons and individuals.

Ibrahim, in turn, connected expressions of solidarity with engagement to promote justice and freedom. Solidarity networks in Lebanon, she pointed out, have been struggling through the coronavirus pandemic that has exacerbated the pre-existing conditions of economic collapse, weak infrastructure, and insufficient services for refugees. She pointed out that ever since the beginning of the refugee crisis in Lebanon, the state has lacked a structured refugee policy and used a violent, discriminatory discourse to justify its economic, political and security failures. This neglect has affected refugees who must cope with weak legal and security systems in efforts to secure their rights.

During the covid-19 pandemic, Ibrahim demonstrated, the aggressive political discourse against refugees has largely mirrored pre-existing patterns of discrimination that have targeted migrants in Lebanon since 1948, when Palestinians migrated to Lebanon, and 2011, when Syrians began to escape the ongoing war. Ibrahim noted that the Lebanese government directly blamed migrants for the spread of COVID-19 in Lebanon by claiming that social distancing cannot occur in refugee camps. Thus, it imposed a curfew on Syrian refugees before announcing the official lockdown on all Lebanese.

Ibrahim stressed the importance of establishing a comprehensive initiative to achieve justice for all persons who live in Lebanon. She focused on the vital role of solidarity movements and networks and stressed their function in societies. Solidarity, according to Ibrahim, is part and parcel of the main standards in efforts to achieve justice and freedom.

This symposium is the first in the webinar series titled Solidarities in Times of Wars and Refuge: Syria, Lebanon, and Palestine in the Global Pandemic organized by KnowWar, a research project funded by the Austrian Development Agency.